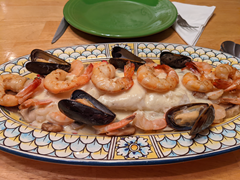 I made this for our Feast of Normandy. This is double the size of the base recipes because I make it for dinner guests.

You can turn this into Poisson a la Normande by adding a cup of boiled white button mushrooms to the Sauce Dieppoise, and adding some roasted oysters to the garnish. You could also use a very dry cider instead of white wine for the poaching liquid.

Mastering the Art of French Cooking