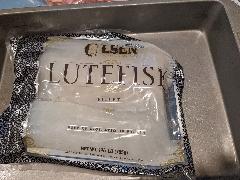 What a strange and sorry ingredient is lutfisk! I think more jokes are made about lutfisk than any other food.

Lutfisk is dried cod, similar to stockfish. When rehydrated, it is first soaked in a weak lye solution, which makes it much quicker to rehydrate than stockfish, but which effects a few remarkable changes upon the fish: it becomes somewhat gummy in texture, translucent in appearance, and practically flavorless. Naturally the sauces and side-dishes are very important when serving lutfisk!

But it's traditional from northern Scandinavia, surrounded by the sea but so cold and stormy that it's best to eat dried fish, however it's preserved. Naturally the descendants of the hardy folk who invented lutfisk honor their ancestors by having lutfisk (in Sweden, Norwegians spell it lutefisk, with an e) at Christmastime. And I'm a big fan of foodie traditions wherever they originate, so here it is!

The main thing to know about preparing lutfisk is that you can buy it frozen, already rehydrated and lye-free, at Scandinavian gift shops that have a freezer. It's really oven-ready except for seasonings.

One more thought: It is my theory that once upon a time when the Swedish candy company Malaco invented this translucent gummy candy, some marketing exec said (in Swedish) "Hey, this gummy translucent stuff reminds me of that fish my mom makes at Christmas!" and so they decided to form the sweet stuff into a fish shape. Of course, it's just a theory.