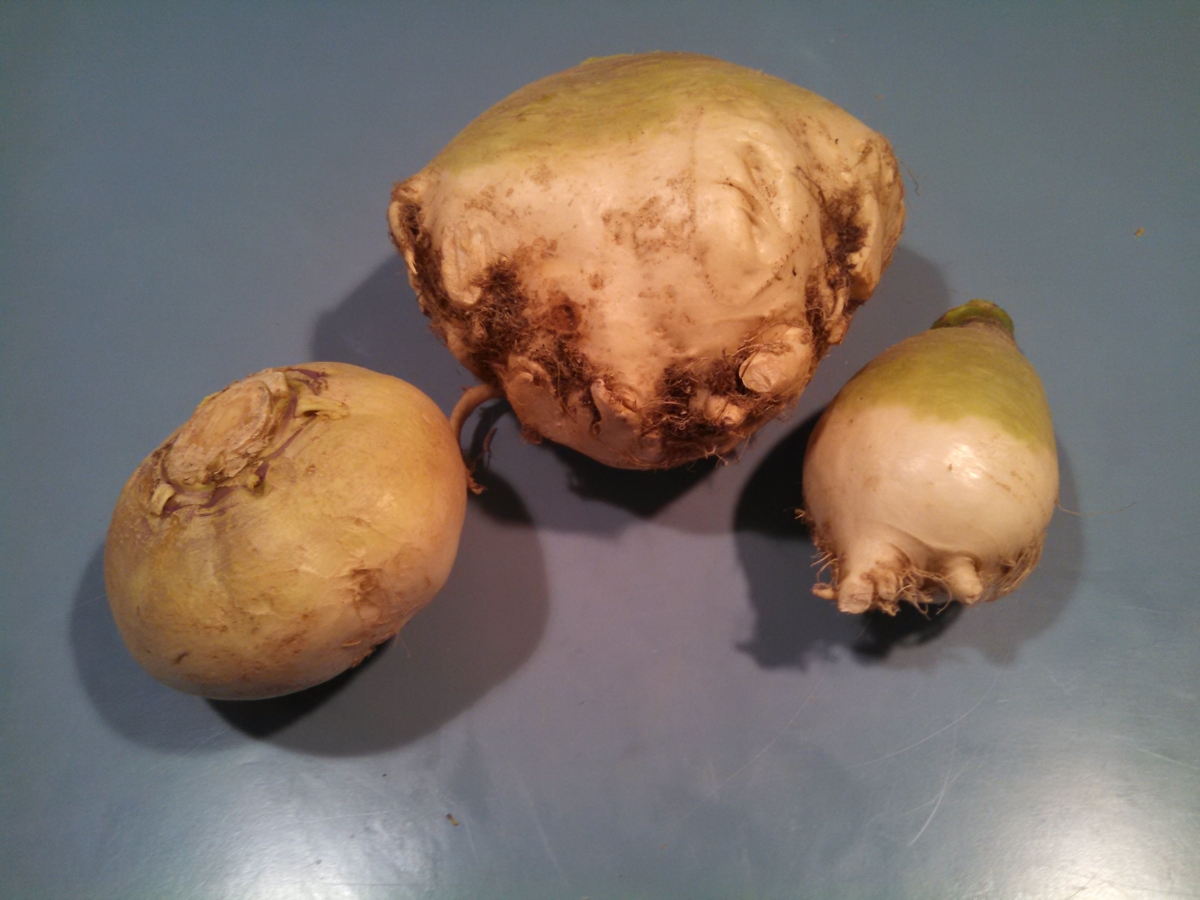 The humble turnip has sustained humans and livestock for millennia in areas of poor soil and and short growing seasons. From this unromantic root has sprung all sorts of confusion; I will try to put some of that straight here.

The first point of confusion is the difference between turnips and rutabagas. They are genetically closely related and can interbreed. Culinarily they are often very similar, and can often be interchanged in menus. In general, turnips are smaller and grow faster than rutabagas. Some turnips can be eaten raw as salad turnips.

Many of us remember turnip with dinner as we were growing up, and it was yellow-orange on the inside. That "turnip" is probably a rutabaga of the Joan variety.

So turnips are white and rutabagas are yellow? It's not that simple. There are white-flesh rutabagas.

How about the outside color? Some have green tops and others have purple tops. Unfortunately for armchair taxonomists, both rutabagas and turnips have varieties of either color.

The simple fact is that it's a confusing subject made more confusing by local usage over the centuries.  In many cases the name is botanically incorrect, but that should not matter much in the kitchen. 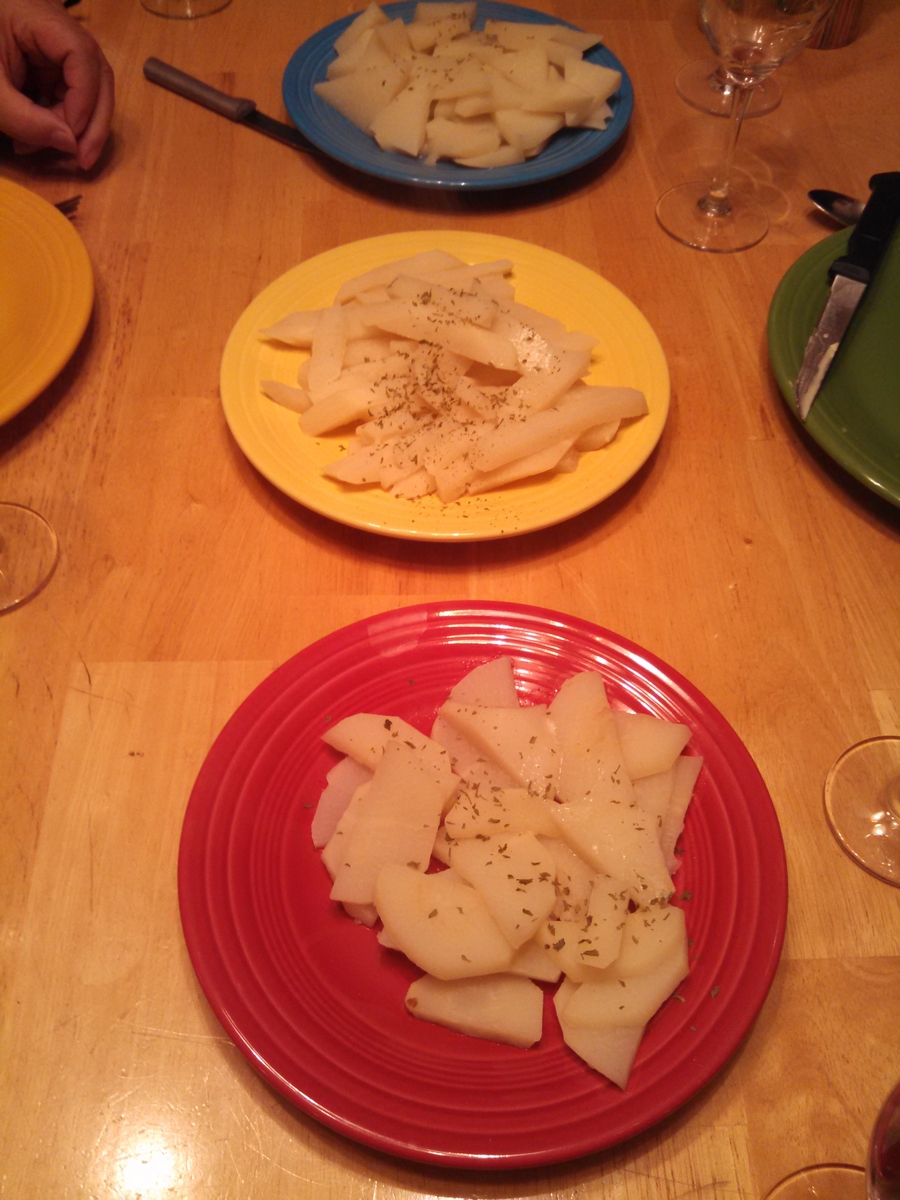 It is likely that the Gilfeather and Macomber turnips are actually rutabagas or hybrids.

Last night we had a tasting of the three shown above. I cut them into batons and steamed them, then served them with a little butter and parsley.

What did we learn? Terroir counts for turnips. The textures were all similar, but the flavors were all different. We each had a favorite, but we all had different favorites. The flavors were not easy to describe; any one of them could easily substitute for another in a New England menu. 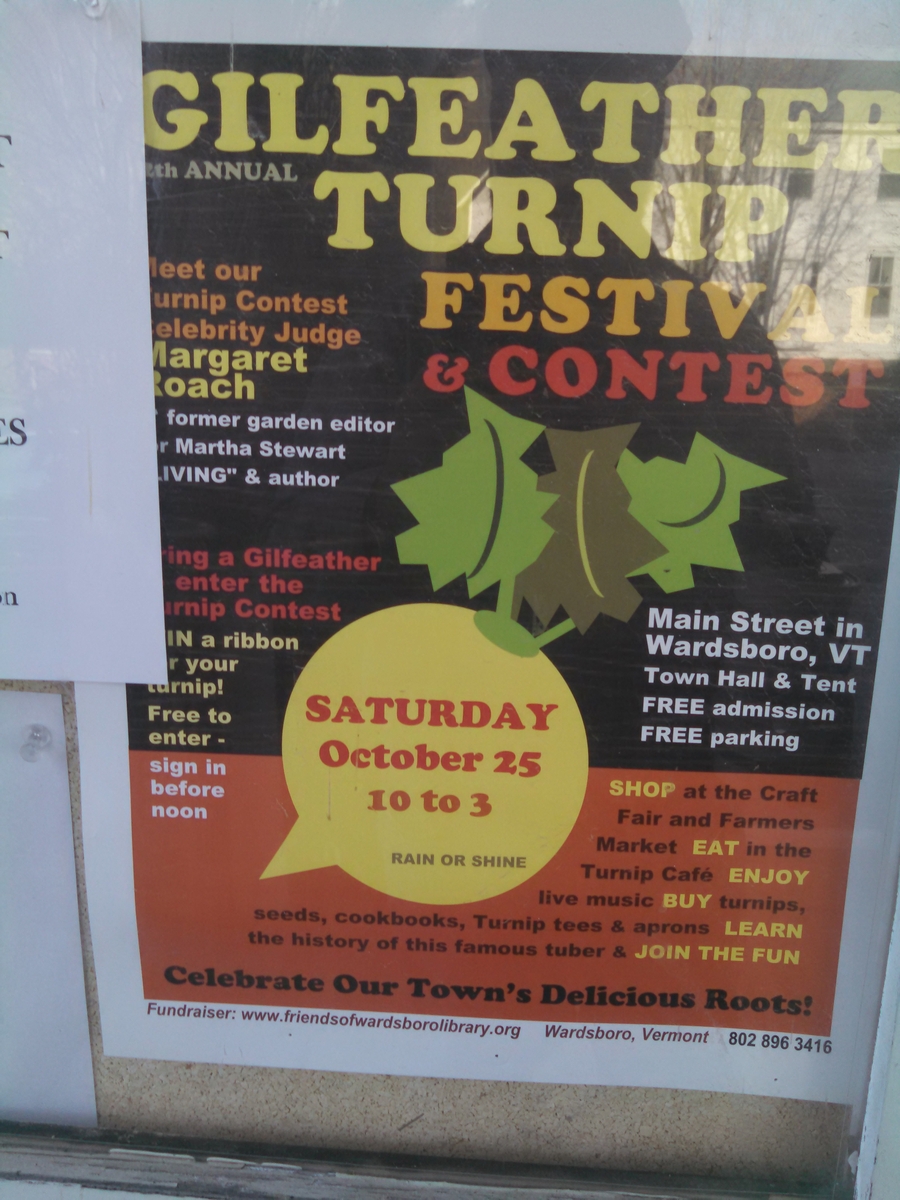 Last weekend we stumbled onto the annual Gilfeather Turnip Festival in Wardsboro, Vermont. They had turnip soup, turnip cupcakes, and all sorts of turnip goodness. There's also an annual Eastham Turnip Festival on the Cape in November. If you make it to Westport, MA, look for the state historical marker about the marvelous Macomber turnip.

What do I need to know about all this? Mostly that there is more confusion in the cooking community than there is in the farming community. If you go to the farmer's market wanting that familiar yellow rutabaga and ask for turnips, you may not get what you want. If you search a seed catalog for your favorite "turnip" and don't see it, look in the rutabaga section.

Finally, do explore the different varieties of turnips and rutabagas! We were pleasantly surprised at the differences.