A Feast of Normandy 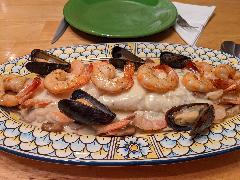 In late February of 2022 we had a feast to explore the classic cuisine of Normandy. As usual we had multiple courses including fish, meat, vegetables, a dessert, and regional drinks. Here's how we did it:

Before dinner, we gathered in the living room to catch up over a slate with a Pate Campagne, three Norman cheeses (Camembert, Pont Leveque, and Livarot), and some chilled Dubonnet. Dubonnet is not from Normandy, but it's a popular aperitif throughout France and I had some in the fridge. 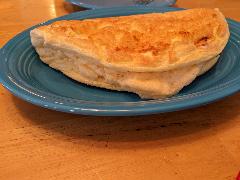 In the dining room, the opener was a puffy Omelette de la Mere Poulard. This is an interesting, simple dish from one little restaurant on the causeway to Mont-Saint-Michel, the famous abbey situated on a tiny island jutting into the stormy Atlantic. Mme Poulard invented this dish, which caught on in a big way and now is surrounded by legend and lore. For all that, it's really just eggs and air, and a peculiar technique. It has become Lorna's favorite breakfast, so I make it a lot these days. 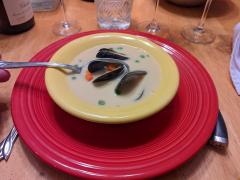 The soup course was a Velouté of mussels à la Dieppoise, which is simply a smooth soup made from the cooking broth of Moules Marinieres enriched with a roux and some cream, and garnished with a few of the mussels. As you will see in a moment, the mussels were an important ingredient in constructing this dinner; I made a big batch and used the mussed and the cooking liquid in two different recipes. 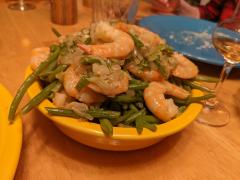 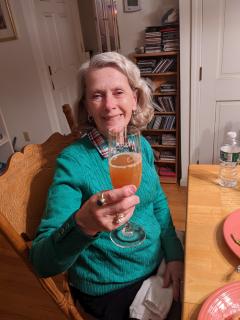 Between the seafood courses and the chicken came Le Trou Normand! This is a Normandy tradition of toasting each other with a shot of calvados to "make a hole" in the first courses to make way for what follows. I had learned about Le Trou Normande from a Parisian colleague at work who has a summer place in Normandy. He consulted on this menu, and made me promise to include "Le Trou".

Instead of wine at this dinner we had Normandy cider, Calvados apple brandy, and a Pommeau de Normandie,  which is a blend of cider and Calvados.

I thought that it might be a family thing or a local thing for his town, but he showed my clips of it from two French movies. I was convinced, although I admit it was not going to take a hard-sell to convince me to include a calvados toast in this dinner! 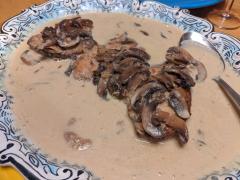 Chicken Breasts a la Vallee d'Auge is a traditional dish of chicken with mushrooms and... cream, of course. Normandy is famous for its dairy farms and much cream is used in the local cuisine.

These dinners are busy affairs and I admit that I was late to the camera on this one, so you'll just please have to imagine seeing two more plump chicken breasts, seared and flamed with Calvados, on the platter with all that creamy mushroom sauce. I can't fault my guests for reaching for them! 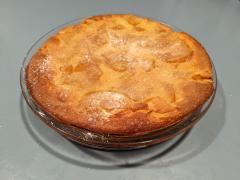 Apple Clafoutis is one of Lorna's favorite desserts. It's on the menu at the Bridge Street Bistrot in Portsmouth, but we don't get there often enough so she's happy when I make it at home. Normandy is known for cider and Calvados apple brandy, so naturally apples are also iconic in the cuisine of the region. A clafoutis is a very simple dish, basically a pancake batter poured over apples and baked until puffy. The Clafoutis aux Pommes has a more famous brother, the Clafoutis Limousin or simply Clafoutis, made with cherries. 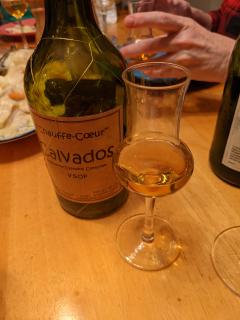 During the dinner we drank cider from Normandy and also some from neighboring Brittany (because at first I could find only the latter and ended up with both).

We also had Pommeau de Normandie, a cider-Calvados blend, and then we finished the evening with sips of Calvados and Benedictine, both local to Normandy.