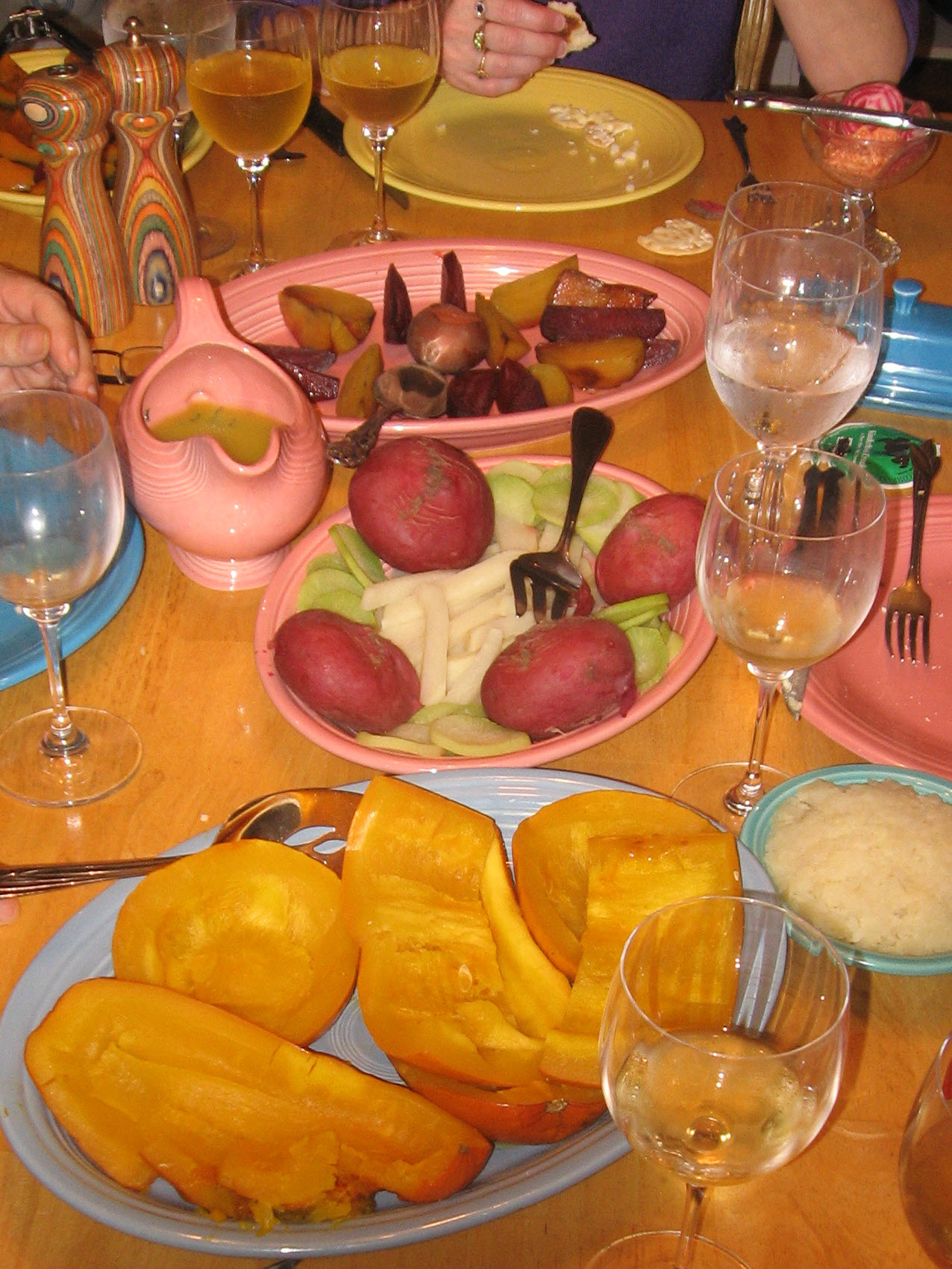 We scored a bunch of root vegetables and other winter fodder on a trip to the upper Connecticut River Valley, so naturally we had to cook them. As is the usual case with explorers, we made forward progress, but made a few errors along the way (thankfully none of them were fatal!)

Here's what we had to work with (I love a challenge!):

So here's the conundrum of cooking Strictly in the Interest of Science: the goal is to be informative, not delicious. When working with something as prosaic as these winter vegetables, a compelling menu was a challenge indeed!

Fortunately Lorna came through in the clutch with a package of chicken breasts and some raspberries (more on those later).

I peeled and cut the big knobby Gilfeather Turnip into batons, and steamed them. I cut the mystery long green turnip-radish into dics and steamed it with the Gilfeather when it was about half done. I steamed the Scarlet Turnip separately, later to learn that was a mistake.  Annette had some Eastham Turnip already cooked in her freezer so we added that familiar favorite as a control.

I quartered the Golden Beet, cut the Lutz Greenleaf Beet into eights, and hacked the Blue Hubbard into manageable chunks. Then I cut the Sugar Pumpkin and the Long Pie Pumpkin into big pieces and baked the whole lot in a roasting pan at 350 for maybe 75 minutes with no seasonings (being scientific...)

I sauteed the chicken breasts with garlic and sage so we would not die of malnutrition or boredom in the line of duty. Then I popped a pair of rival Kingston Black Ciders to ward off thirst during this perilous endeavor.

The Turnip Verdict: If you like the Eastham Turnip, then stay with it. If you still haven't found what you're looking for in a turnip, well, I am sorry for that. But the Gilfeather is a mighty fine and delicate turnip that responds well to Yankee seasonings (i.e. butter and salt, maybe a modicum of pepper or sage). The sorry Scarlet Turnip was flavorless and utterly lacking in character or distinction of any kind. I recognize that four foodies from Plymouth may well find the Eastham Turnip more familiar, and a similar quartet from the Green Mountains might unanimously go for the Gilfeather... so try them for yourself and post your thoughts below.

The Turnip Verdict, Appealed! BUT - there's a wrinkle here. Suppose you're not of old Yankee stock, and you don't boil the devil out of everything before you eat it: There's a whole class of Salad Turnips, and that was the home to our poor maligned Scalet Turnip. So cute, and so misunderstood! I had trimmed the ends of the poor lass, and tasted them more out of habit than anything else. It was refreshing and delicate and aromatic like a nibble of spring. The next Turnip Challenge will have to feature two subclasses!

About those Beets: The Golden Beet wins again. The Lutz Greenleaf Beet is sweet and pretty, but it still cannot match the Golden Beet for complexity and appealing flavor. We also had a pair of Italian Chioggia beets, one sliced thin and raw, the other roasted. As expected, the raw one kept its cute colorful red-and-white candy stripes, but the roasted one degraded to an undistiguished pink. The flavor was acceptable but it did not outcompete the Golden Beet for flavor or the raw version for color. The trophy goes to the Golden Beet.

Winter Squashes: I can be grateful for those chicken breasts. After carefully tasting the elusive charms of the beets and turnips, it was with some trepidation that we progressed to the winter squashes. Now there are many fine winter squashes, so this was by no means a representative sample. In fact, it would have been merely a Pumpkin Tasting had that little Blue Hubbard not shouldered its way into contention.

"Little Blue Hubbard?!"" I hear some saying. As anyone familiar with the breed can tell you, a Blue Hubbard Squash is typically about the size of your torso. It's a great knobby thing of a sort of cadaverous blue hue, in no way appealing as a foodstuff or as anything else except possibly a doorstop or a weapon. And its deep orange flesh doesn't help matters - it really looks like it came from Mars.

Nonetheless this ugly but humble vegetable saved the day for the winter squashes. Both pumpkins were watery and flavorless. We could agree that the new-to-us Long Pie Pumpkin  was every bit as good as the familiar Sugar Pumpkin (which I have baked and served many times) but neither of them seemed to be a good specimen. 2011 was a terribly wet year, and the pumpkins suffered for it. We will have to revisit the Pumpkin Challenge, and add a Long Island Cheese Pumpkin to the roster. The verdict: No Decision, with great thanks to Mr Hubbard for keeping your hard-working judges fed through the ordeal.