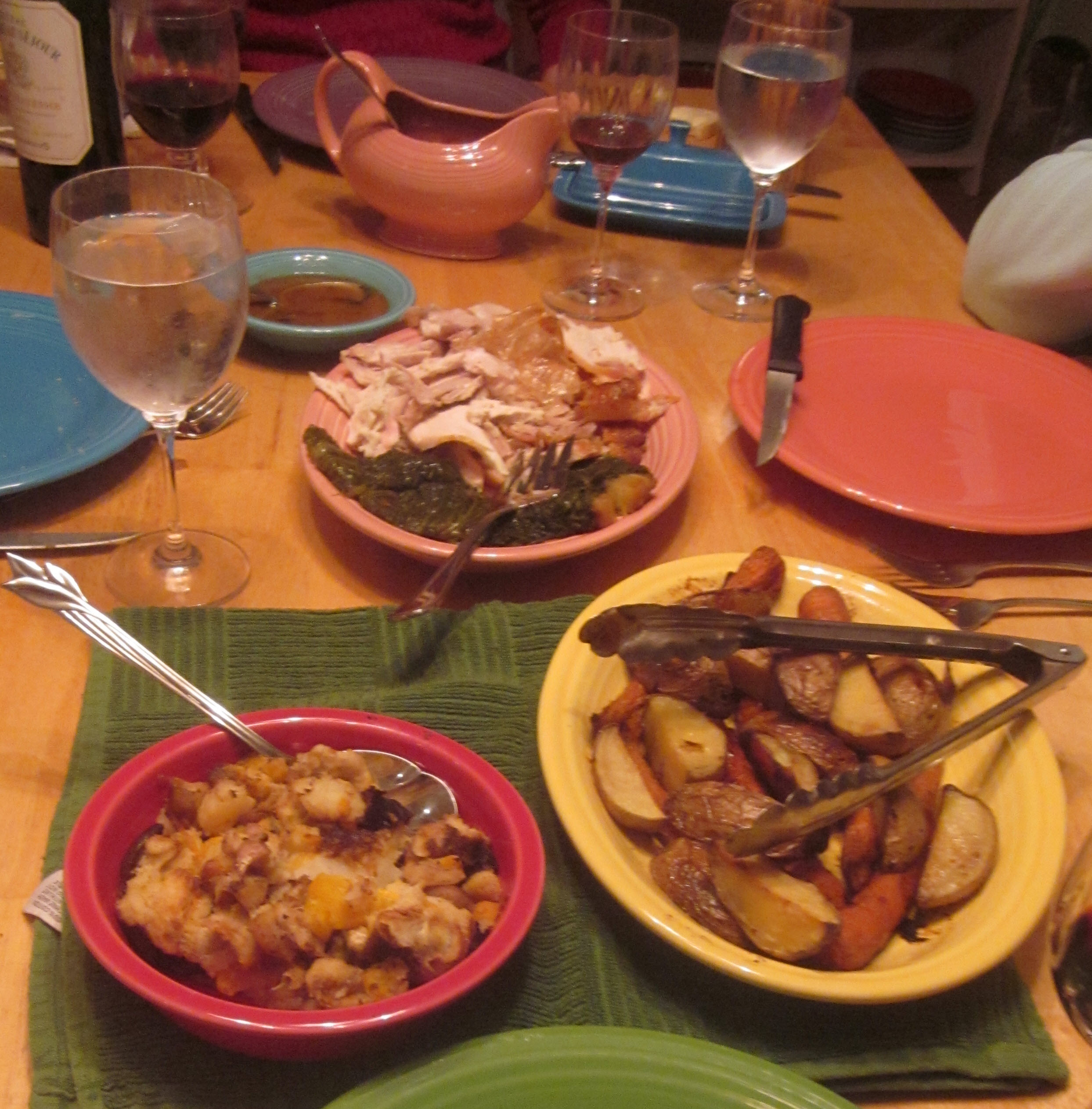 Annette wanted a fancy French dinner for her birthday this year. Actually, she wanted a Diplomat Pudding and the rest of the menu developed from that idea. She had discovered the Hotel St. Francis Cook Book, from 1919. It is not a standard cookbook; it has three fancy menus for every day of the year, and recipes where needed. The menu for December 7th was not that compelling so we came up with this. 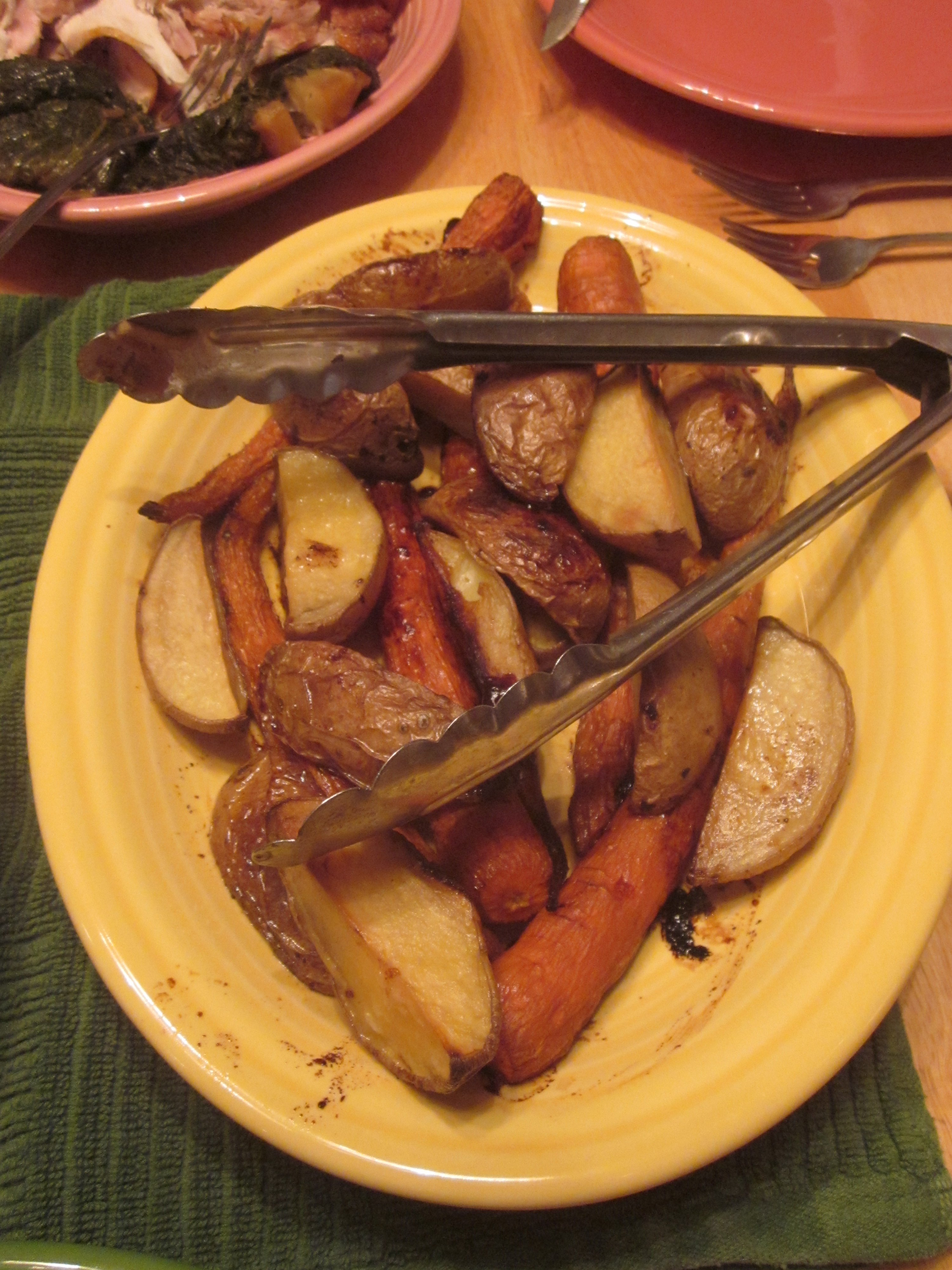 We started with three fine Vermont cheeses: A perfectly ripe Harbison from Jasper Hill, and the Verano and Invierno from Vermont Shepherd.  These were followed by a French Onion Soup. Both the cheeses and the soup were served with a Chateau Haut-Beausejours St-Estephe Bordeaux 2005. 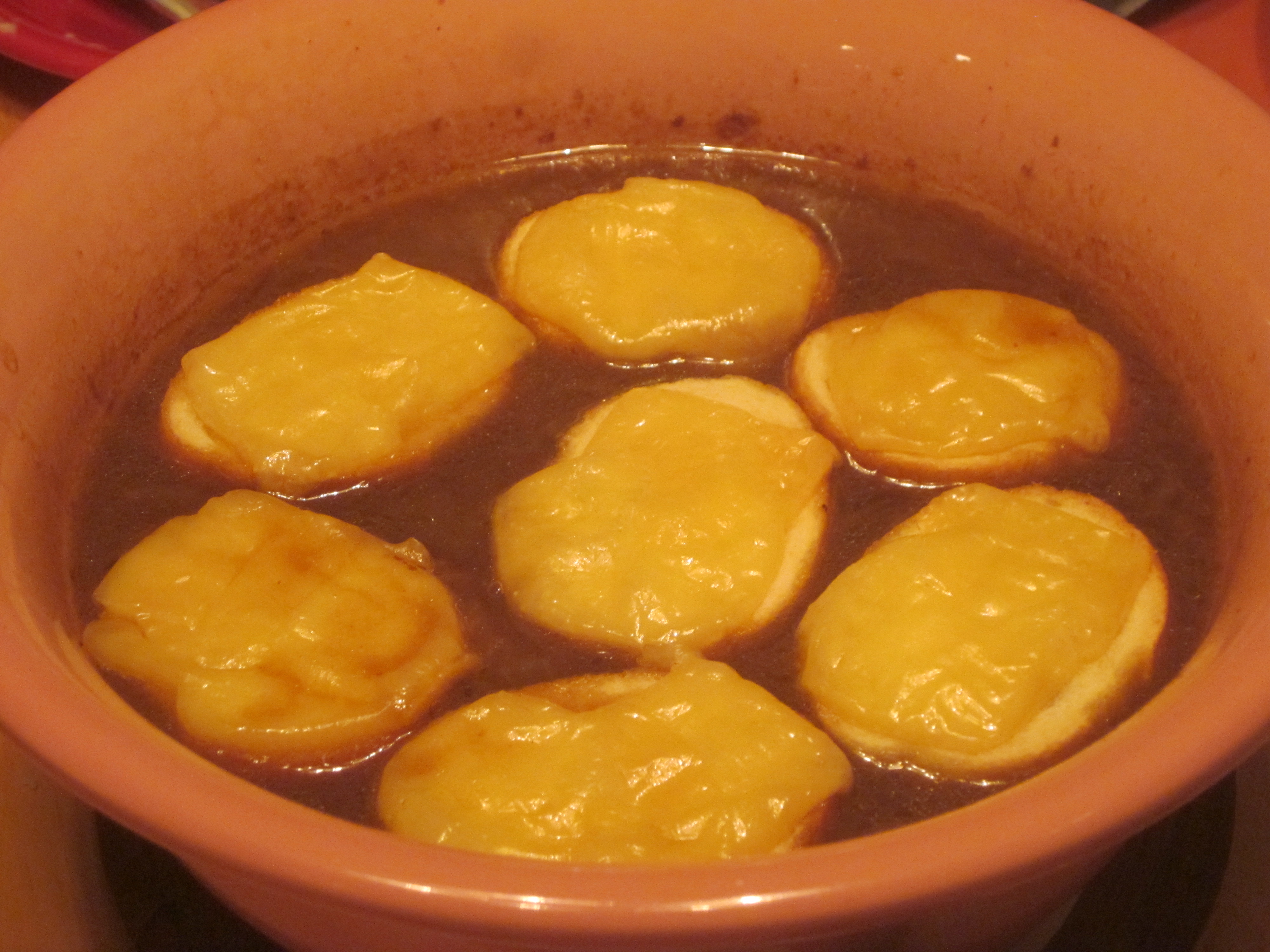 The soup has a classic elegance that is all the more surprising for its simplicity. It's basically just caramelized onions in beef stock. If you tell a child in the right tone of voice that dinner is onion soup, s/he'll be horrified and then giggle at the joke that something as unpleasant as onions could be served for soup. But the simple combination of excellent ingredients sets this up as a perfect canvas on which to paint the feast that follows. 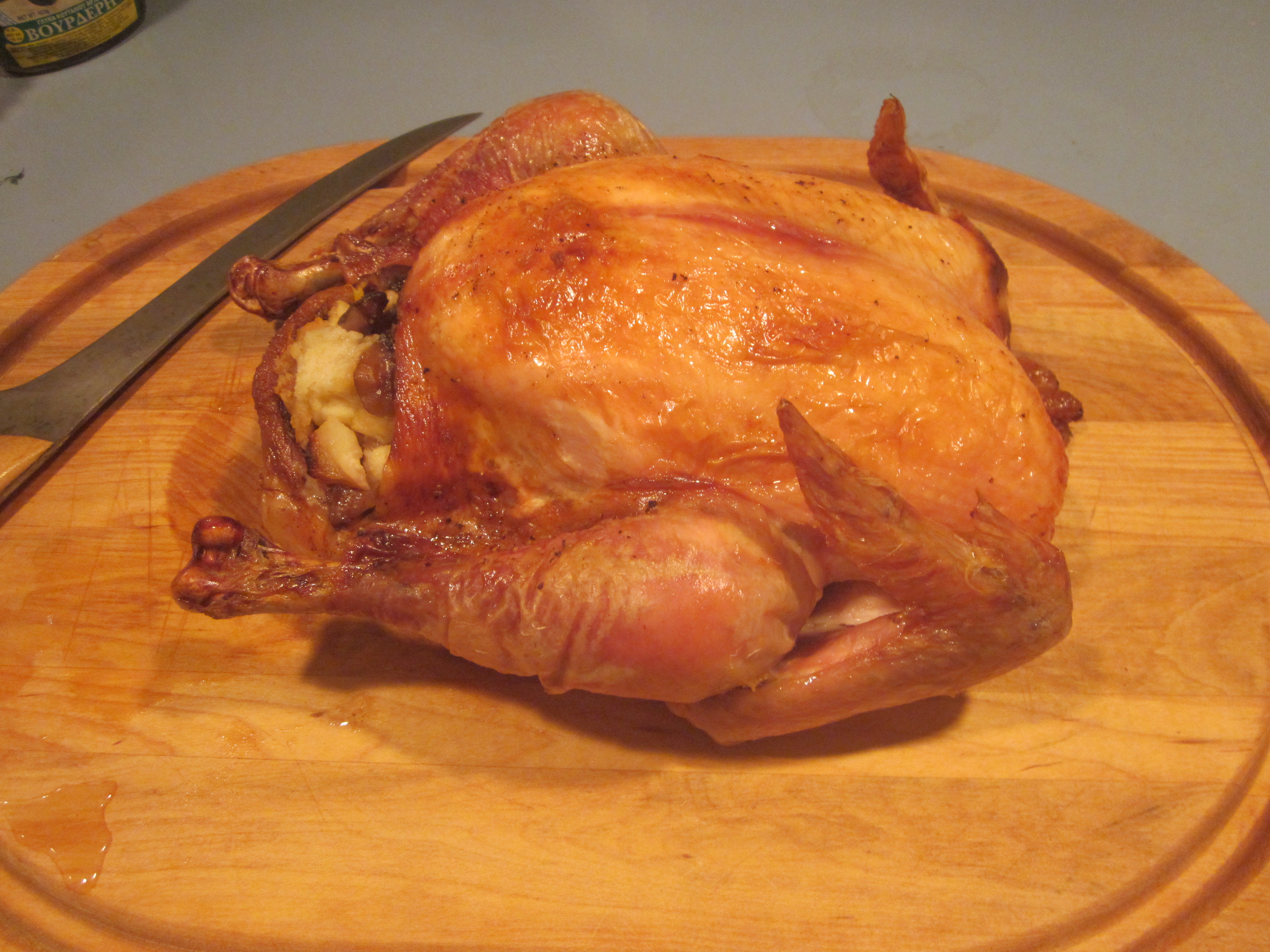 After the soup we set out the main course, which included some carrots and potatoes that had been roasted with the capon for the last hour of its oven time, some braised lettuce that was a surprise treat, the St. Antoine Stuffing, and the Capon.

The Capon was the prince of the evening. Most of us had never had capon before. It had roasted perfectly and beautifully; it was tender and flavorful, more flavorful than a chicken roasted the same way. 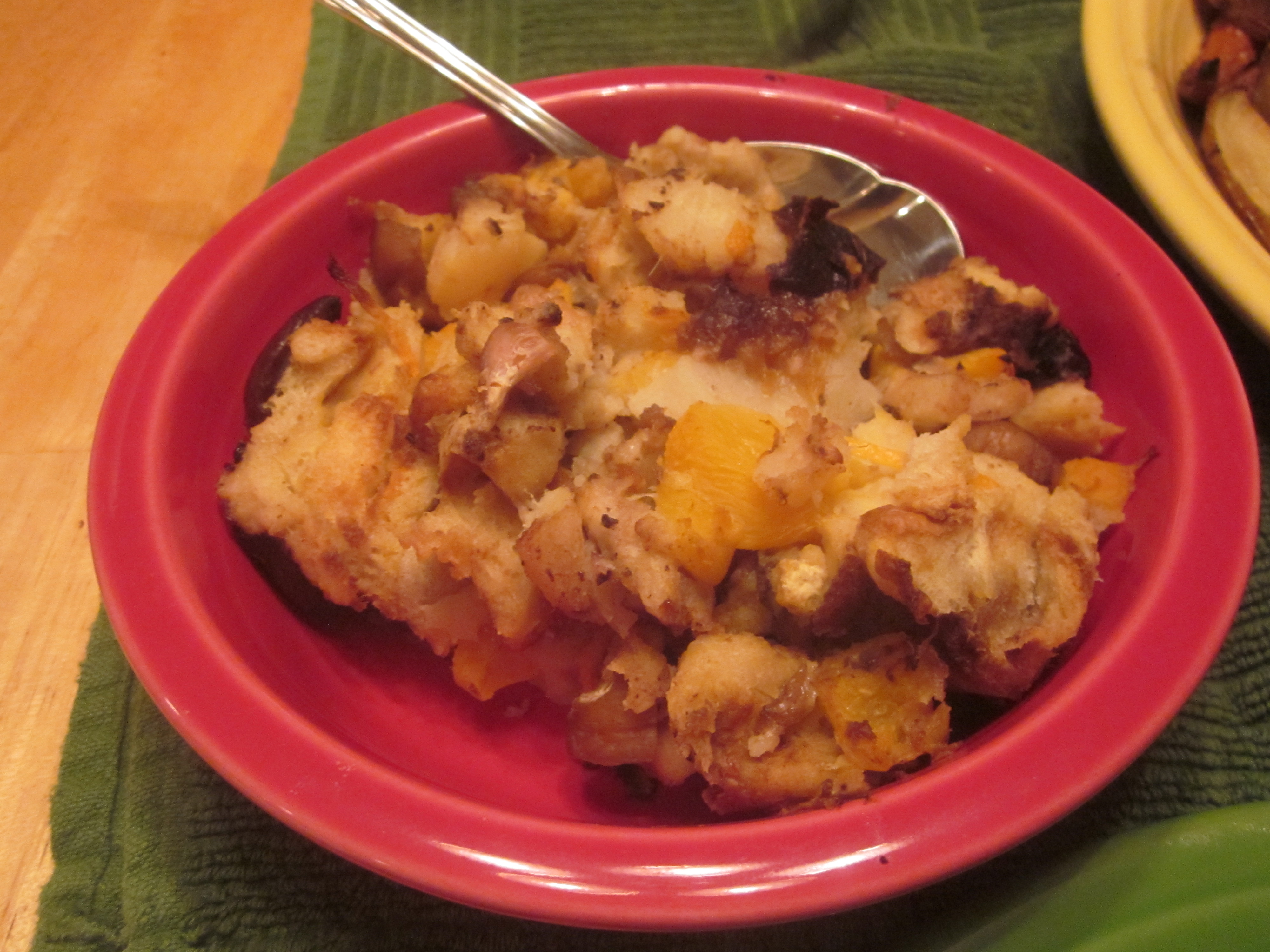 The stuffing for the bird was a bizarre amalgam from the St. Francis Cook Book. I don't know much about it; the recipe is very brief and there is no supporting information. Google knows nothing of this weird creation. It's a bread stuffing with no herbs, flavored with brandy, chestnuts, and a whole bowl of cooked fruits: peaches, pears, apricots, and prunes. It was very tasty and it suited the flavor of the capon well. (I thought it sounded good before I selected the recipe!) I don't know that it would do so well in a turkey. The updated recipe is on this site at Stuffed Capon St. Antoine. 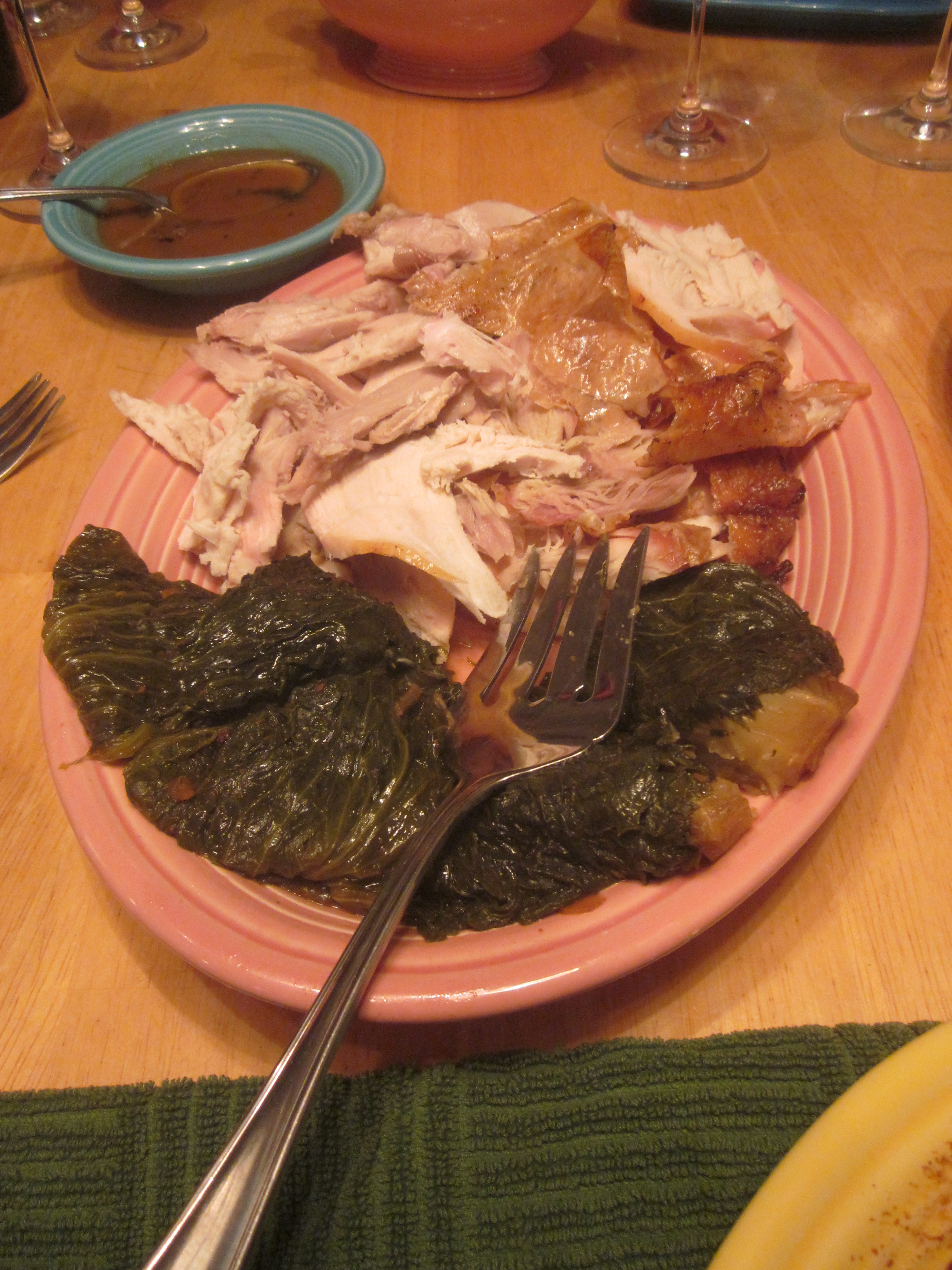 The braised lettuce was an odd recipe to us, but there it is in the venerable Mastering the Art of French Cooking. I had seen the recipe a hundred times, but it never leapt out at me. For this dinner, suddenly it seemed like just the thing.

The green leaf lettuce, normally fresh and crisp and a little bitter,  had become tender, mild, savory and complex after an hour and a half of slow cooking. It complemented the roast bird excellently. I will definitely make this recipe again.

By this point we had come to the end of the Bordeaux and were ready for the second bottle of the evening. 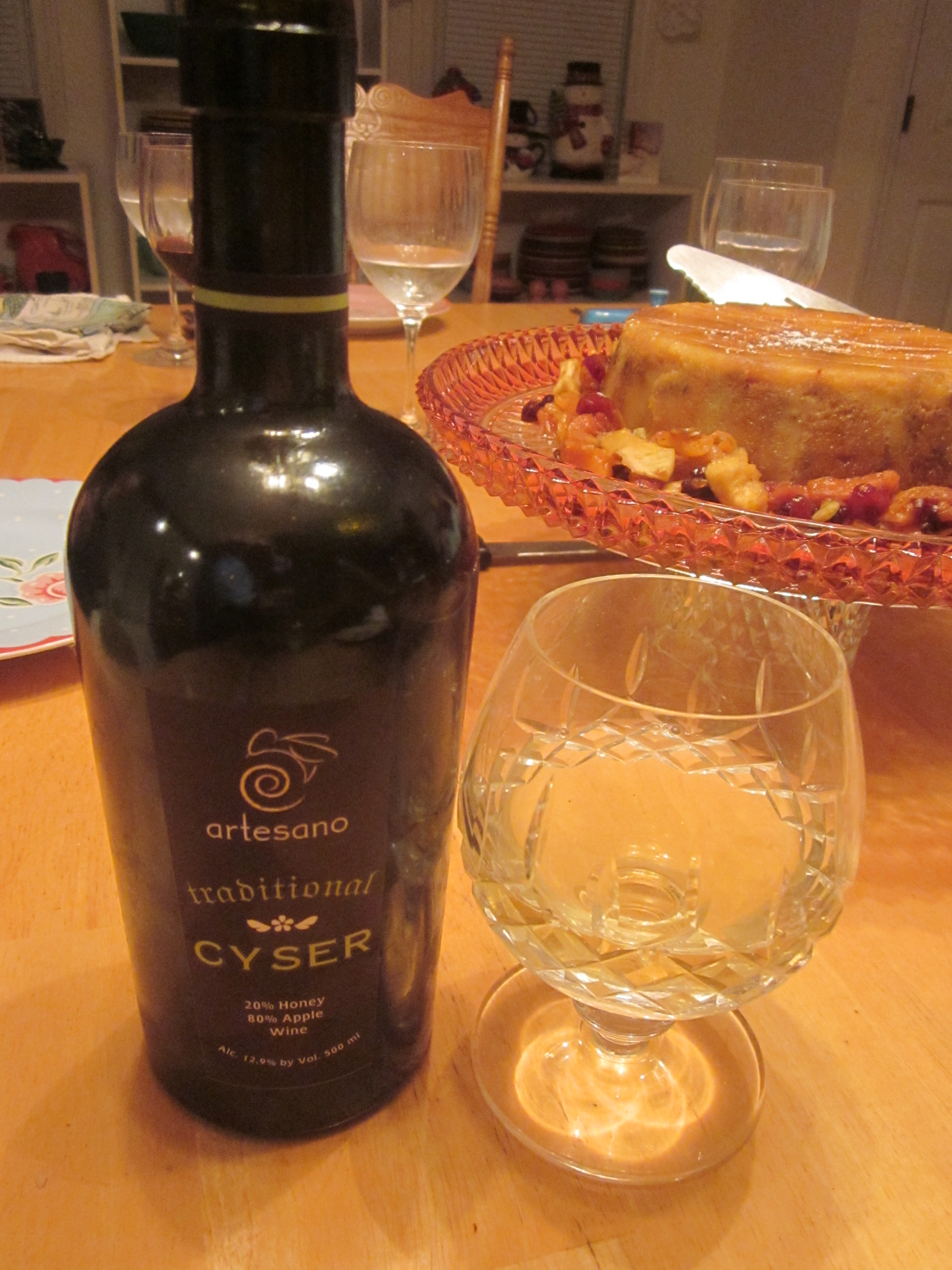 The fruit flavors and the chestnuts made this a tricky wine pairing. If I were to do it again, I would start with a peppery Chateauneuf-du-Pape.

But for our second bottle, I avoided the fruit of the vine altogether and set out a wonderful cyser from Artesano, a meadmaker in Groton, VT.  Mead is honey mixed with water and fermented. A cyser is like a mead, but instead of water, the honey is mixed into fresh apple cider and then fermented.

Richmond is not slow to admit that he doesn't care for cider or mead, but he liked the cyser. 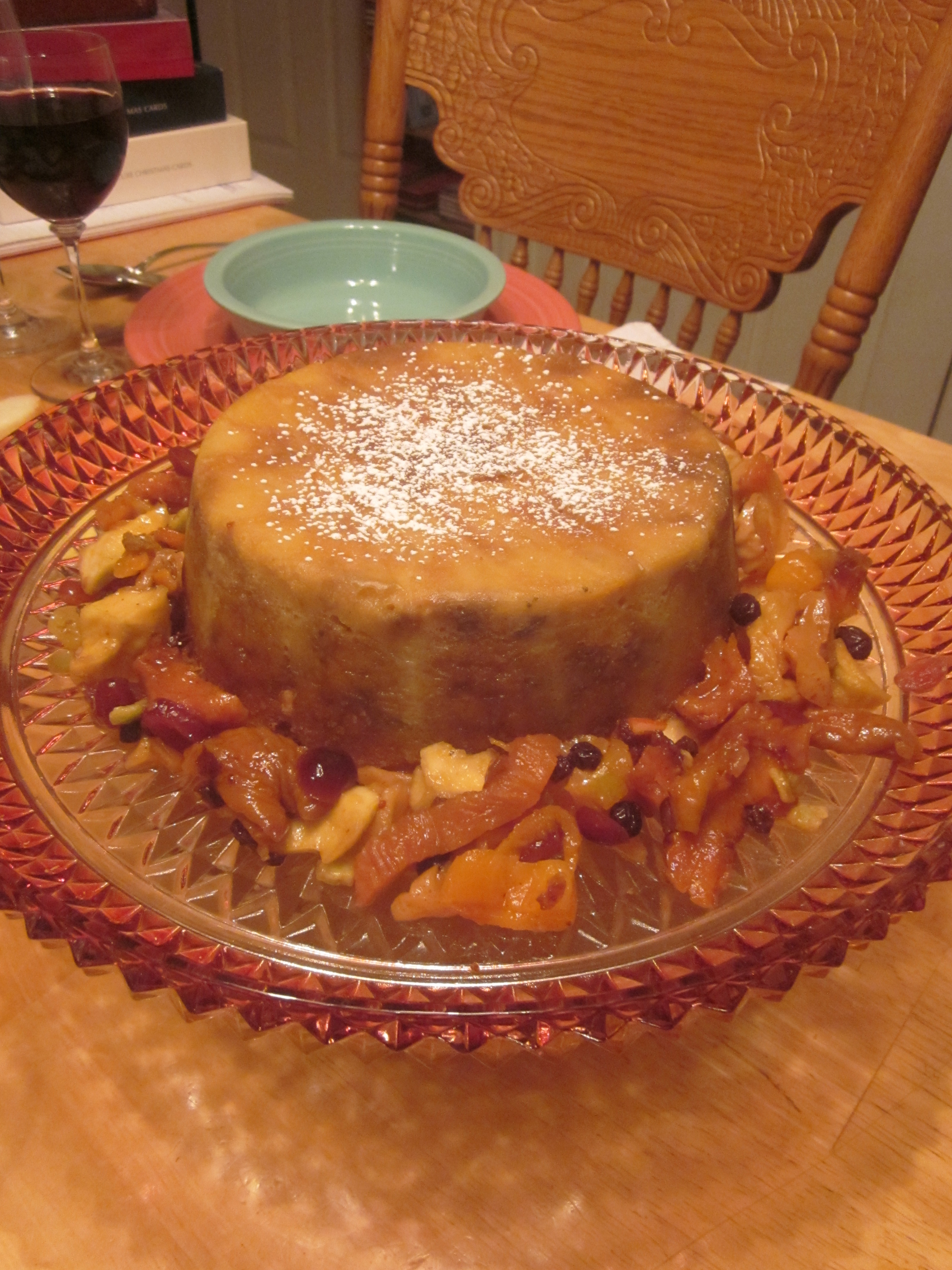 Finally we reached dessert - the one command performance of the evening, and I had nearly wrecked it!

The Diplomat Pudding is a classic dessert dating from 1907. I have read about it, but never tasted it or even seen it. From the reading I had done about it and from the ingredients it seemed a close relation to our old favorite Nesselrode Pudding.

The recipe described setting ladyfingers and jam on a custard, but the custard I had made was thin, and refusing to set. I called Annette. She asked me to read the whole recipe, and exclaimed "It's OK, it's a bread pudding! The custard will thicken when it bakes." I added that note to the recipe on this site. 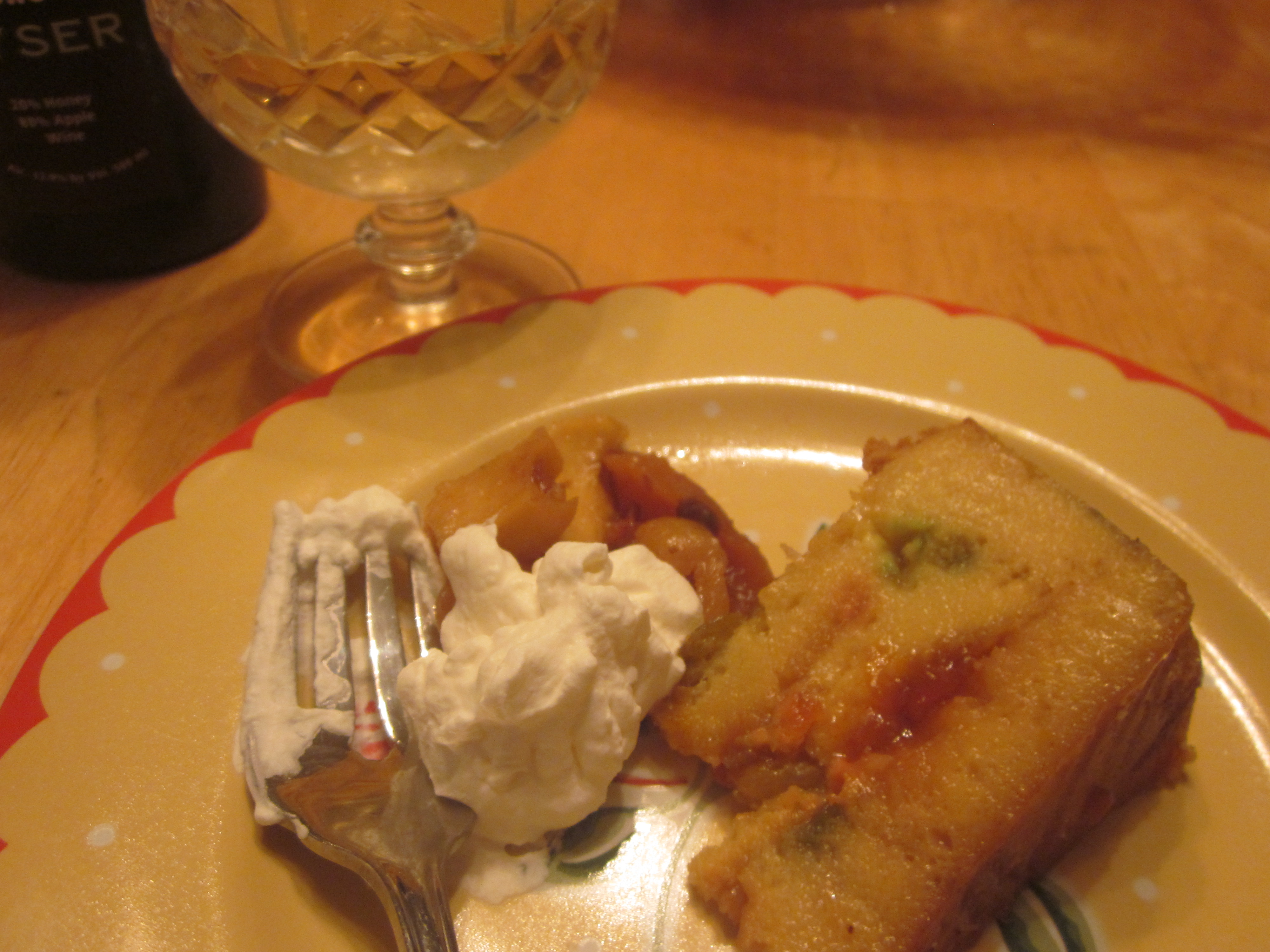 I was a little bummed out that my fancy-schmancy centerpiece dessert was just a glorified bread pudding, until we tried it. It's heavenly! And it's not at all hard to make once you know what you are making. The ladyfingers absorb and are absorbed into the custard making a divinely light, rich, wonderful dessert. We'll definitely do this one again!